The basic skill of network weaving is "closing triangles".

A triangle exists between three people in a social network. An "open triangle" exists where one person knows two other people who are not yet connected to each other -- X knows Y and X knows Z, but Y and Z do not know each other. A network weaver (X) may see an opportunity or possibility from making a connection between two currently unconnected people (Y and Z). A "closed triangle" exists when all three people know each other: X-Y, X-Z, Y-Z.

Let's look at a real life example of network weaving.

Here we see our friend and colleague Ed Morrison, of iOpen, connected to two of his clients -- the economic development folks in both Lexington, KY and Oklahoma City, OK. He knows each of these groups, but they do not know each other. Much could be learned if both of these groups shared their economic development experiences with each other -- innovation happens at the intersections.

But you can't introduce groups to groups, or organizations to organizations -- it works better by introducing people to people. So, Ed picked two leaders from each group to close the triangle. He picked Cynthia Reid at the Oklahoma City Chamber of Commerce[OKC] and Lynda Brabowski of Commerce Lexington[CLX]. This triangle is illustrated below.

When Lynda expressed a desire to Ed for CLX to visit another region that they could learn from, Ed immediately knew the answer -- visit OKC, who previously had faced similar issues and handled them very well. Ed, also knew which introduction to make -- a network weaver needs to know WHOM to connect by knowing the people, the groups, and the dynamics involved in the connections that are being made. The closed triangle -- after Ed's introduction -- is shown below.

This was not the end of this weaving opportunity. Ed accompanied the CLX folks on their visit with OKC. During the trip he closed a few more triangles. Ed introduced the CLX group to two of the key architects of the economic blossoming in Oklahoma City, Ron Norrick -- the former mayor that started the effort, and Burns Hargis a key OKC board member. Those closed triangles are below. 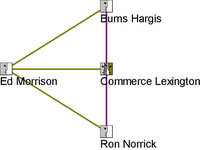 The cool thing about closing triangles is that anyone can do it, and you do not need anyone's permission to do it! Close triangles around you wherever and whenever you see an opportunity!!! You and your community will benefit.

After you close key existing triangles, open new ones for potential connection later. It is just like gardening -- once you gather the current harvest, you need to make plans for future harvests. Open new triangles by meeting people not in your network neighborhood -- diverse sources of knowledge, opinion and experience. Like any garden, a network also needs pruning. Don't feel bad about pulling "weeds" in your garden, or not replacing certain plants for the future -- just be careful you don't damage the roots/links of the rest of the garden!