Spread of Influence in a Network 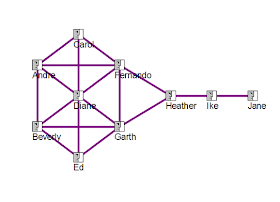 About a week ago I put up a simple quiz on TwitPic using David Krackhardt's kite network as focal point. The kite network above shows a small group of people with strong symmetric[two-way] communication links. I asked,

"Where would you plant your msg in this net? Why?"


Several of my Twitter followers immediately answered and then the post was re-tweeted by several friends of mine. One friend sent it out to 30+ "social media mavens" -- none of them braved an answer.

This is a toy problem, yet it helps us think about how information and influence spreads in a human network. When I present this problem during one of my many talks on this subject, the first answer from many voices in the audience is usually "Diane." Then there is a period of silence and a few people sheepishly offer "Heather." Finally some joker in the back of the room yells out "Jane" and everyone has a good laugh.

So, what is the right answer? There are several.

The most popular answer of "Diane" is not a bad answer. The eye is attracted to the hub structure around her. She has the most connections and does reach a majority of the network with a direct connection.

The choice of "Heather" is a good one -- my preference. While Heather has only three direct ties, she reaches everyone in the network within two steps. Diane has several longer paths to reach everyone. Information and influence both degrade with each step in a network. After one step the message begins to grow fuzzy, after two it is becoming very noisy, and after three it is basically useless -- background hum. We might be all separated by six degrees but it is the first two steps that really matter.

Another good answer is "Fernando or Garth". They are between Diane and Heather and can also reach many people in the network quickly. Those that know social network analysis come up with this answer because these two guys have the best closeness centrality.

All of the good choices mentioned above are not guaranteed to get your message passed around even this small network. Just like a forest fire depends on one burning tree igniting another tree, or two, Diane, Heather, Fernando, and Garth all depend upon others to continue passing the message. It is not just the seeded node that matters, but the network neighborhood that the seed is embedded in! And... each node has a different threshold of adoption -- for one topic Carol may be a slow adopter, while Ed may be quick, and vice versa for a different topic/idea.

I am reminded of this song by the Alan Parsons Project -- The Turn of a Friendly Card:

"The game never ends, when your whole world depends,
on the turn of a friendly card"

Or in today's world -- the turn of a friendly tweet!

We have a simple problem, with no simple answer. So, how do you work this?

What happens when we try to scale this to real human networks that have dozens or hundreds of interconnected friends or colleagues in a network like below? 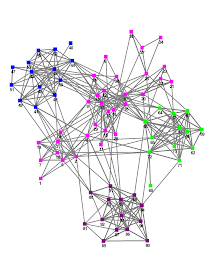 The secret is... redundancy! Yes, redundancy, that concept that we tried to eliminate in the 1990s with untold hours and dollars of business process re-engineering. Some redundancy actually helps networks function better.

In the simple kite network above we would use redundancy to seed the message with Diane and Heather! Some people may not hear Diane today, but will pay attention to Heather tomorrow.

In the real human network above we might need to find a dozen or more places to plant our viral visitor. Social network analysis software can help us discover the best soil for planting!

Update...
So, I tweeted the link to this blog post when I finished writing it: evening Eastern Standard Time in USA [GMT -5]. The response was not great. bit.ly showed me that 25 people clicked on the link in the first hour. The next morning I tweeted the link again and now more of my Twitter followers were paying attention -- by Noon bit.ly reported over 300 clicks. Finally I ran another tweet @ midnight, for all of Pacific folks, and early-risers in EU and RU. This added another 100 clicks accroding to bit.ly.

Lesson learned: It is not only the persons you plant the message with, but also the timing of the message. People pay attention at different times -- especially on Twitter. Redundancy in timing works too.