So many people, So little time


There are many interesting discussions happening on Twitter in the last few weeks. I have been paying attention to the conversations about how to measure social media influence/rank/authority. Many people trying many metrics. All of the current measures seem to have their issues... one gives too many high scores, another spits out way too many around the median, and still others are easy "to game."

IMHO, the best metric so far is Retweet Rank -- it is not perfect, nor complete, but it gets at a key aspect of Twitter -- what is interesting, what are people paying attention to, what is useful and who is sharing all of that. If someone re-tweets what you posted/tweeted then that is a vote of attention/quality -- if many people re-tweet you, or the re-tweet the person that already re-tweeted you, then better yet! In this sense Retweet Rank follows the example of Google's very successful PageRank algorithm -- people point to web content they find interesting/useful/valuable.

In a recent exchange someone asked me, "Why do you follow so few people on Twitter, yet many people seem to follow you?" I answered, "Simple, it takes effort and time to follow people, but much less time & effort to have many people follow me." This reveals a typical constraint in all of our social networks -- we only have so much time/energy/attention to devote to people in our lives, we cannot be connected to everyone. Even on the internet we must choose where we pay attention.

The diagram below shows an individual's social network. The person in the middle [red node] has a set [green nodes] of friends/family/colleagues or people they follow on Twitter. 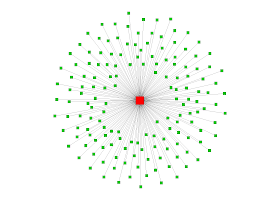 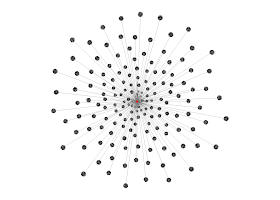 Each of the social circles seem to be isolated from each other. Looking at this picture of a person's social network, we think we need to follow at least one person in each social circle/cluster/community to know what is being said in that group.

But the picture above is misleading -- it forgets one important aspect of all social networks. Friends of your friends are often friends. Colleagues of your colleagues are often colleagues. Those ties are missing from the simple picture above. The map below includes the links that exist between and amongst friends and colleagues. Click on picture below to see detailed structure. 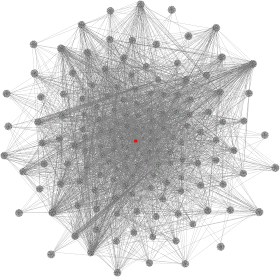 Our software finds the emergent patterns in the data, but the massive interconnectivity between friends and colleagues does not leave us with a pretty picture like the simple social spore above. Click on picture below to see detailed structure. 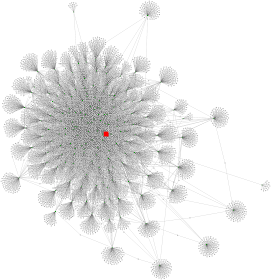 So, if many of the social circles above are already interconnected do I have follow an individual in each social circle/community on Twitter? Probably not. The trick is to find the people that reach many social circles and follow them. Of course, we need to find more than the minimum of people to follow -- you want some redundancy in your network so that there are multiple paths to places of interest for you. Finding these key nodes is what social network analysis is all about.

And this is why I follow so few people on Twitter! For the time invested, I want maximum return. I use the redundancy of connections, between the many social circles I am interested in, to my advantage. I follow a select group of people that give me the same access as following someone in every group. Follow the few to reach the many!

Because I have chosen them carefully, I want to actually read the tweets of the people I follow. A small part of my "following network" is always in churn, but the number of people I follow on Twitter never exceeds 100 [currently I follow about 70]. Those who follow thousands of people readily admit that they can not read the fire hose of tweets they get every day.

Strategically I am building a small, yet efficient, group that reaches out into the many diverse information pools I am interested in. I know I am finding good people to follow on Twitter by the number of great exchanges that emerge on many topics. Think before you follow, use your time and ties wisely!

UPDATE #1: Looks like Stowe Boyd advises to keep "Following" count >= 100. Hat tip to Robert Patterson. I will usually add new people to follow and then may keep them, or substitute them for someone else after a week or so. I tend to have a core of 50 people that do not change much, and then another ring of 20-30 that churn. People that stay in this later group eventually become part of the core -- which grows slowly over time.

UPDATE #2: Another reason not to auto-follow people was revealed by the recent Twitter SPAM and HACK attacks. People were spammed via the "direct message" [a.k.a. "d m"] protocol in Twitter. A direct message in Twitter is a private correspondence between two people on Twitter that are following each other. A dm is like a short private email. You can only get a dm from people you follow, and if you auto-follow, chances are you will be spammed. Don't be a promiscuous follower, practice safe following!